Cubeecraft of Jinora from Legend of Korra as an Airbending Master

Since we met Jinora in Book one of The Legend Of Korra, the show has hinted to her above average abilities in airbending. As the show progressed we saw her communicate with spirits, travel to the spirit world, and recently travel outside her body to see what is around her.
After Jinora met Kai, her request for her airbending tattoos increased, feeling she was indeed a master of airbending and even out-mastered her father Tenzin. Although Tenzin agreed her abilities were masterful, she had yet to deserve her tattoos. However, in the finale of Legend of Korra Book 3, Jinora displays her airbending abilities as she instructs her fellow airbenders to construct a large tornado to bring down Zaheer. Her cool head and amazing airbending rewards her the title of master and she receives her airbending tattoos.

This cubeecraft displays Jinora as an Airbending master, rocking her tattoos in her airbending attire (Almost looks like a young Aang).

To make:
1. Cut out each item along the outer black lines.
2. Cut along the white on each tab using the Craft knife
3. Cut along each red line using the Crafto knife
4. Fold along each inner solid black line and slide each tab into the slots created with an Craft knife to form a cube of the head, body, arms, and feet
5. Slide the arms through the white slots on either side of the body.
6. Slide the feet through the red slots at the base of the body.
7. Slide the now completed body through the red lots of the head.
She is now complete
Use the image below for an example of how she should look when completed.

To download this cubeecraft, click the image, right click, and select save as. You can then select a location on your computer. It will save a large image (2979 x 2354)
|

You can find more Avatar The Legend of Korra cubeecrafts (Asami, Katara, Makoa, Bolin, Ne Fong, Amon, Korra and more) by clicking the image of Amon’s face below. 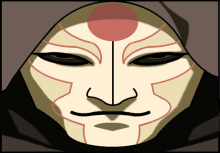