Cubeecraft of Hans from Disney’s Frozen

To Start off the 2014 Halloween Cubeecraft Collection I asked my fans which Cubeecraft they would like to see first from the following photo.

The replies poured in. While every letter was requested, there was one that was requested far more than any other. In fact it was a landslide! Many stated they wanted to see this one because they were unsure of who or what it was. The other silhouettes had defining characteristics, while this one had almost nothing to distinguish who it might be. So as requested by so many of you, the winning letter is…

And just who might this handsome Silhouette be? Why none other than the man with a plan, lover of sandwiches, straight from the Southern Isles, Hans Westerguard! Don’t worry, he is a prince so there will be no nose picking or eating of any boogers (although, according to Kristoff, every guy does it).

Hans is the youngest of 13 siblings. He quickly realized that he would never be king of his own kingdom so he decided to marry into another and rule there. When he came across Arendelle, he discovered that like him, Anna was shut out and ignored by her sister. So in an effort to win her heart, this cunning man used Anna’s need to be loved against her. Eventually he asked something crazy which lead Anna into a whirlwind of trouble with her sister and her kingdom.

I have to admit, I thought Hans was so charming and cute. The first time Anna and Hans met they both literally fell for each other. Well, actually, Anna was knocked off her feet by a horse and Hans fell into the water because of his horse. So I guess you could say they fell because of a horse. But still the whole scene was adorable. I was heartbroken when I discovered that Hans was not as good as he appeared to be and He was actually the one with the Frozen Heart.

This Cubeecraft features Hans in his Southern Isles Prince attire and iconic white gloves. The face was particularly hard to create. Believe it or not, Hans has several female characteristics and my cubeecraft kept looking like a girl instead of a Prince of the Southern Isles. I mean look at that face, it is very feminine.

I found I had to simplify some details to give him a more masculine face while still keeping the details that make him look like Hans.

This Cubeecraft is free to download, Print and Create. I only ask that if you do create it and share it, please be sure to give SKGaleana credit. Below are some basic instructions for creating this cubeecraft.

To make:
1. Cut out each item along the outer black lines.
2. Cut along the white on each tab and the white around the bangs using the Craft knife
3. Cut along each red line using the Craft knife
4. Fold along each inner solid black line and slide each tab into the slots created with an Craft knife to form a cube of the head, body, arms, and feet
5. Slide the arms through the white slots on either side of the body.
6. Slide the feet through the red slots at the base of the body.
7. Slide the now completed body through the red lots of the head.
He is now complete
Use the image below for an example of how he should look when completed.

To download this cubeecraft, click the image, right click, and select save as. You can then select a location on your computer. It will save a large image (2979 x 2354)
|

You can find more of my Disney cubeecrafts (including Anna, Elsa and Olaf) by clicking the image of the Beast’s face below. 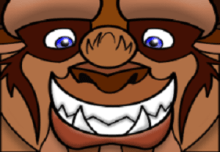